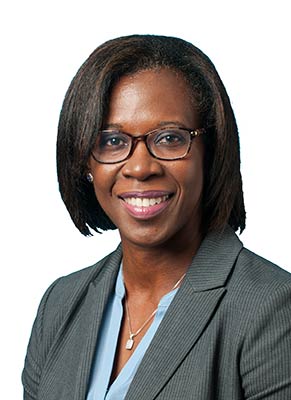 Debbie A. P. Fraser heads the Commercial Department. Debbie has been in practice since 1992 and is qualified to practice in Barbados and Jamaica. She is a graduate of the University of the West Indies and the Norman Manley Law School in Jamaica where she received the Legal Education Certificate of Merit. Debbie joined Clarke Gittens Farmer in November 2003 as an associate and became a partner in the firm in May 2005. Her recent practice has concentrated on blockchain technology, mergers and acquisitions, takeovers, energy law, securities law, secured lending, project finance and both international and domestic capital markets for debt financings.

Prior to joining Clarke Gittens Farmer, Debbie was a partner in one of the most reputable law firms in Jamaica where her practice covered various areas of law including securities law, copyright law, banking and corporate finance, telecommunications and commercial litigation.

Debbie was also a part-time lecturer at the University of the West Indies (Mona Campus, Jamaica) and the Mona Institute of Business (an affiliate of the University of the West Indies) in securities law, contract law and business law. She is a former Chairman of the Copyright Tribunal of Barbados and former Deputy Chair of the Financial Services Commission, which is responsible for regulating the financial sector other than banking services. She remains a member of the Board of the Financial Services Commission of Barbados. Debbie is also a director of a financial institution which is a member of a group which operates in the Caribbean.

Debbie has delivered a number of papers on securities law, directors’ duties and responsibilities under the companies legislation and a review of development and changes in certain financial legislation.